Does anyone remember when David Brooks was a conservative? Me neither, and yet the adjective persists. He’s gotten great mileage out of the not-very-original but not-very-objectionable-either argument that a society, properly constituted, is a nested set of smaller societies, from friends and family on up through your block, your council district, your diocese, etc., all the way up to the Federal Government. He combines these with a Burkean horror at the excesses of the French Revolution; for David Brooks, it is always 1789 1968. This in turn gets folded into a frothy meringue of faddish neurobabble and pop psychology. The result is an odd chimera, a giddy atavistic technocratic utopian anachronist: a Benthamite Whig monarchist. Imagine that on your coat of arms.

Anyway, Brooks uses his column today to accuse Edward Snowden of taking the delicately wrought matryoshka doll that constitutes American civilization up to the roof and hurling it callously onto the sidewalk below. He accuses Snowden of betraying his own mother. Betrayal is one of those words that you only ever encounter in two contexts. In actual politics, betrayal is part of the lexicon of fascism. I’ll let others on the internet accuse Brooks of this. Despite his authoritarian predilections, Brooks is not a fascist, any more than Brooks is a conservative, or a liberal; Brooks is just a grumpy, entitled suburbanite on the downhill side of middle age—il est lui-même la matière de son livre. The other area in which one encounters betrayal is in the realm of romance. Ah, so that’s it. The odd tone of Brooks’ column grinds against what one expects from a polemic, but it does remind you of a breakup letter. Brooks isn’t outraged; he’s jilted.

Gore Vidal famously, or notoriously, quipped: “I am at heart a propagandist, a tremendous hater, a tiresome nag, complacently positive that there is no human problem which could not be solved if people would simply do as I advise.” Vidal was a real aristocrat, and so he could turn his curdled humor on his own noblesse oblige; Brooks is an arriviste, lacking the confidence to giggle at his own certainty; he echoes everything in that sentence that follows positive and nothing that precedes it. Brooks views himself as essentially metonymous with the United States of America, thus the attitude toward Snowden. I can’t believe you’re breaking up with me! You can’t break up with me! I’m breaking up with you!

The column is full of peculiar, #slatepitch counterintuitions (“He betrayed the privacy of us all. If federal security agencies can’t do vast data sweeps, they will inevitably revert to the older, more intrusive eavesdropping methods”), which, in true Dear John fashion, simultaneously accuse Snowden of never doing the dishes and of always getting water all over the counters when he does the dishes, but there’s one fascinating and bizarre politico-historical claim that merits an additional note:

He betrayed the Constitution. The founders did not create the United States so that some solitary 29-year-old could make unilateral decisions about what should be exposed.

I have searched in vain, and I find no part of the Constitution, original text or amendments, that makes any provision whatsoever for the keeping of secrets, official or otherwise. In such absence, the accusation makes literally no sense at all. If you take cranberries and stew them like applesauce they taste much more like prunes than rhubarb does. Now tell me what you know. The founders did create the United States in part to protect against the issuance of general warrants by an unanswerable government. The closest they get to mentioning 29-year-olds is in making 25 the minimum age for Representatives, 30 for the Senate. Mostly, though, both bodies are occupied by Mr. Brooks’ cohort. Boy, they’re really doing a bang-up job. 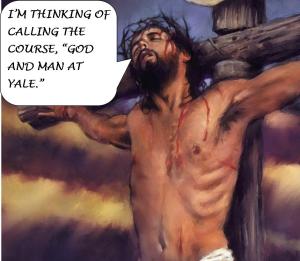 One of the questions we might ask before concluding that David Brooks little ethical Area 51, dba “Humility”, at Yale is some sort of uniquely middlebrow, learning-annex hack job is just how unique it is, because this is an Ivy League, after all, and I suspect the course catalog is pretty well-larded with these sorts of PoliSci Rocks-for-Jocks offerings by notable alums. Brooks just has the bad fortune of being uniquely self-unaware enough to title an otherwise bland exercise in celebrity “intellectual” egotism Humility. If he’d called the class, “AmHist Colloquium: 201: The Decline of the Eastern Protestant Establishment from World War II to the Reagan Revolution,” no one would’ve said boo, and exactly the same gang of future legislative aides would’ve taken it. If you find yourself making fun of David Brooks or Yale, you probably don’t understand what either institution represents, or what their respective purposes are in the American life of the mind. Where do you think the sort of people who put David Brooks on the Times op-ed page and NPR Fridays and so on come from, Pomona? Bard? Who do think nods sagely at all those Tom Friedman columns you find so gloriously incoherent?

Things from the Backpack